The Rochester West by-election is coming soon, and I’ve had a number of promotional leaflets through my door for our local parties. Before I put them in the recycling bin, I thought it would be fun to see how the different parties are using photography to promote their candidates. I have tried not to look at their policies or political views or read the content in the leaflets. Instead I have attempted to give a rounded interpretation and analysis of their use of photos.

The Conservative leaflet shows a tilted, informal headshot taken on St Margarets Street. Alan’s stance is slightly turned to the left looking direct at the camera. Although not confrontational, as it might be if he were facing straight on to the camera, he has a relaxed smile. It seems to have been taken on a smart phone, giving a wide frame and low picture quality, he is also slightly out of focus. It does however give a leading line drawing the viewers eye down St Margarets Street, metaphorically enforcing that Rochester is the focus of this campaign. 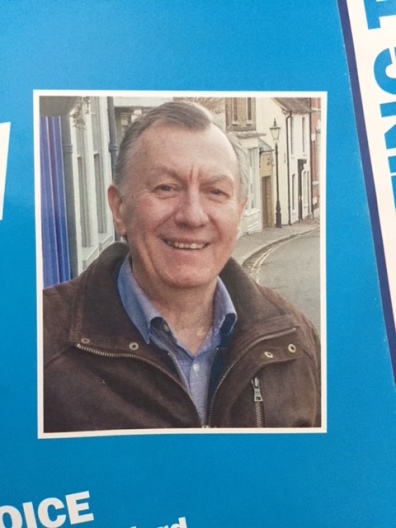 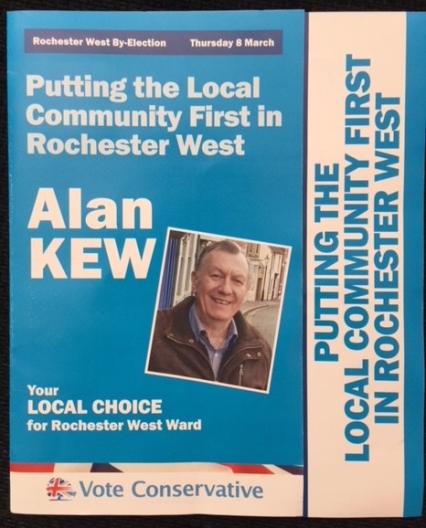 The off-set fold of the front page invites you to explore the inner content. Inside are a number of posed and informal shots. A mixture of  ‘in situ’ or ‘in action’ photos demonstrate the candidate supporting various campaigns in the area. The photos in green spaces suggest Alan is ‘out-and-about’ and active in his local area, however some, for example the photograph of the candidate in the green space with his foot on the white barrier, feel somewhat staged.

The last page shows three further ‘in situ’ photographs of the candidate with a local shop keeper and former candidate for the area. This contrasts with the informal layout of the first page. The catalpa tree photo is perhaps the most relaxed photo with Alan in a traditional male pose standing off centre with his hand in his pockets.  This could either be interpreted as being relaxed or disinterested.

Overall the photographs within this leaflet are relaxed and informal and although they connect to build a story of the areas the candidate supports, it feels visually overloaded.

Martin’s front page portrait echoes the informality of the Conservative candidate, this time taken in a green space. Although I would not advise standing straight on to the camera, he has something in his hand, which somehow breaks the barrier, making it seem less confrontational. He is positioned at the centre of the photograph, the leading line is a path in the middle, which similar to the Conservative candidate, leads the viewer’s eye back to central Rochester. He is centred between two trees, nicely avoiding the foliage sprouting out of the top of the head look. Martin has a relaxed and friendly smile.  I would surmise this was taken on a smart phone or basic digital camera, on an overcast day, as it slightly out of focus and quite dark. It would have been great to see the photo a bit brighter.  Martin appears to be ‘out-and-about’ as he has his Liberal Democrats badge on and the photograph is taken by someone else. It is also good to see a younger candidate.  There is one other photo on the page linking to a support campaign, and a stock photo from the Liberal Democrats, suggesting more of the overall aims of the party as opposed to the achievements of the individual for the community, as illustrated on the Conservative leaflet. 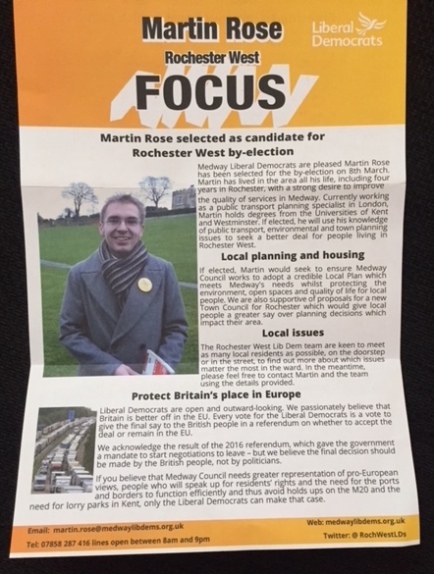 Overall, the portrait on this leaflet is the most friendly, relaxed and welcoming, with a smaller number of other photos indicating the wider party views.

The first thing that struck me about the Labour Candidates leaflet is it is well thought out. The front page is dominated by the River Medway with a ‘hero’ shot of Alex looking into the distance. I would suggest this has been taken by a professional photographer, due to the framing and use of depth of field.

This photo reminded me of a promotional leaflet for a theatre production (not dissimilar to the poster for David Tennant in Don Juan in Soho last year). The candidate is the focus of the promotion. Alex appears well groomed, wearing professional dress. I would, however, liked him to make a little more eye contact with the camera. This appears to be from an organised shoot, rather than an ‘out-and-about’ campaign shot.

Overall the photographs in this leaflet are of higher quality that the other candidates,  and a case of quality over quantity. However, from the visuals I am unsure from this what campaigns the candidate has supported.

Rob’s portrait is also informal, it appears to have been taken as a ‘selfie’. It has been taken from below which doesn’t result in a very favourable angle, this main photo on the leaflet appears to have been stretched giving a ‘fish eye’ appearance, with a better smaller version on the reverse. The candidate is ‘in situ’ at a polling station, with additional photographs on the reverse indicating some issues the party are supporting locally. As with the Liberal Democrats leaflet there doesn’t appear to be any direct visual link to the achievements of the candidate. 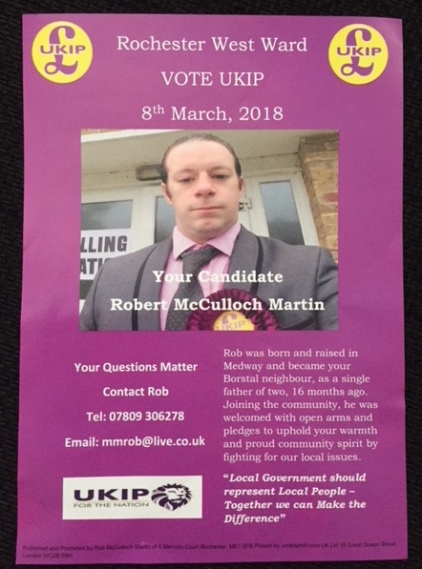 Sonya’s leaflet was the last to arrive. I wasn’t sure whether I would receive one, given the Green’s environmental concerns, however was pleased to see it has been printed on recycled paper. Similar to the Conservative, Liberal and UKIP candidates, her portrait is informal and slightly off centre. She is looking directly down the lens with a slight head tilt and relaxed smile. It appears this has been cropped from a larger photo used on the Green’s website. In the source photo her pose looks stilted, but the crop on the leaflet is much more favourable. The exposure of the photograph is spot on the website, however it hasn’t translated well on the leaflet, which could be due to the paper. As this headshot is the only photograph, like the Labour leaflet, there is little visual information about the campaigns the candidate has supported.

All the leaflets use photography differently their candidates displaying their party colours. Each puts their own twist on their photos, using hero shots, snapshots, informal, ‘selfies’ and ‘out and about’ photos. A leaflet is an easy way for candidates to get across their messages, the photos used create the immediate visual connection with the person behind the campaign. The parties have put forward four white male candidates and one white woman, I would have liked to have seen a bit more diversity.

Given the timescale for this campaign it is understandable why some of the photos may appear rushed, this highlights a need for a quality stock of photos, taken at events and regular organised photoshoots.